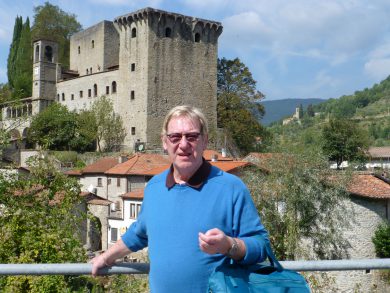 A very long time ago, when we were starting our journey to become comedy writers for television…or any medium that would have us, there weren’t any writing courses on which we could enrol. They simply didn’t exist. We found a drama group where one could learn the rudiments of drama, but nothing at all about comedy.

So when last year we were asked to deliver a week-long comedy writing course in Tuscany, we felt it would be churlish to say no; so guess what, we accepted the invitation. The warm sunshine, the Italian food and wine and daily sessions under the vine, up there in the Tuscan hills rather appealed to us, and when the course was announced it rapidly filled up with those who, like ourselves a long time ago, want to learn all about writing a comedy script and getting the damn thing accepted.

The course will run at The Watermill, Posara, Tuscany, from Saturday, September 7, until Saturday, September 14, 2019. We only mention it in our blog because we believe that there are three places left on the course – or at least three more would-be comedy writers could be accepted…maybe four, if you come in couples, and the Watermill tell us it would be a pleasure to meet you.

We delivered a similar course three summer ago and a young woman on the course has since gone on to be commissioned to write her first comedy pilot for US television. She is on the verge of fame and certainly fortune…so it could happen to you…if you have what it takes.

We rarely have the time to give of our expertise to people starting out, but the location and the need to ‘give something back’ enticed us to give up a week of writing to instead offer a week of teaching.

It could be a lot of fun.