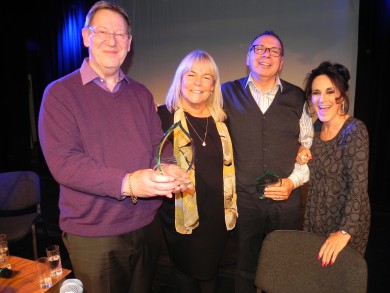 We would like to thank everyone who came to our Living Legends event, on Sunday September 13. We would also like to point out that it was the British Comedy Society who decided we should be so honoured. It wasn’t our idea to become legends, it was theirs.

It was an amazing afternoon, as if we were on four consecutive episodes of This Is Your Life. We were interviewed at length on stage by Louis Barfe, a frighteningly well informed cultural historian, and several clips of our work were shown, one of them, an untransmitted pilot entitled Still William, never seen before and unlikely to be seen again.

Literally dozens of stars – and when we say “literally” we mean literally – gave up their Sunday afternoon to join us on stage and reminisce about the shows we made with them. Many were kind enough to say we played a crucial part in their careers. Of course, they all played a crucial part in ours. Kenneth Cranham, Matthew Kelly, Michael Troughton and Nigel Planer were among those happy to praise us to our faces. Many others, including Patricia Hodge, Michael Maloney, Liz Carling and David Cardy were happy to just be in the audience…apparently.

After the love bombing, Joan Bakewell conducted a question and answer session, with her usual warmth and aplomb. Since Joan helped to invent cultural broadcasting it was no surprise how well she was received by an audience delighted have so many luminaries sitting among them.

The event climaxed when two-thirds of the stars of Birds of a Feather, Linda and Lesley, came on stage to present us with our Living Legends awards, which entitle us to free entrance to all cinemas, theatres and sporting venues throughout the world.

We are still trying to recover our modesty after so much acclaim and find our thoughts turning to five people who couldn’t be there and who meant so much to us: Barry Took, Frankie Howerd, Adam Faith, Allan McKeown and Rik Mayall.

And now we must face one of the big questions Living Legends have to answer; “Where shall we go for lunch?”